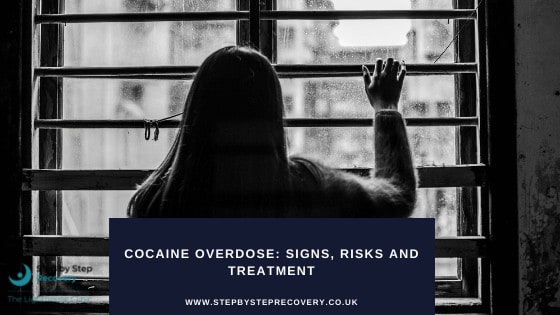 Many people mistakenly believe that an overdose means falling unconscious as a result of taking too much of a particular substance. However, in truth, the symptoms of an overdose aren’t always this obvious. As a result, side effects are often ignored or missed completely. Failing to identify the symptoms of a cocaine overdose can be fatal if treatment is delayed unnecessarily. Familiarising yourself with some of the lesser-known signs is extremely important and may even save a life.

How does a cocaine overdose occur?

A cocaine overdose occurs most often during a binge. A binge involves consuming a large measure of drugs within a short space of time and using cocaine in this way means that the body is unable to metabolise it fast enough. The build-up of dangerous toxins is what ultimately sends the central nervous system into overdrive. At this stage, blood pressure, breathing, heart and temperature rates all begin to climb.

Which symptoms should you be looking out for?

The symptoms of a cocaine overdose will vary from person to person. This is because the body’s reaction to cocaine will depend on a number of different factors, such as age, weight, gender and overall health. Someone with underlying health conditions will ultimately be at greater risk of suffering from a cocaine overdose.

The chances of a cocaine overdose will also increase based on the method of use. For example, injecting cocaine directly into the bloodstream means that it crosses the blood/brain barrier much faster, giving a more intense high, but ultimately putting a person at a greater risk of danger.

Similarly, mixing cocaine with other substances, particularly sedatives such as alcohol or heroin only exacerbates the chance of a fatal overdose.

As well as physical symptoms, there are also psychological factors that may indicate an overdose. Being aware of the signs could ultimately save a life.

Physical symptoms of cocaine overdose include, but are not limited to:

Some psychological symptoms of a cocaine overdose include:

What to do if you think you, or someone you know, may be experiencing a cocaine overdose

It’s important to understand that any time you take cocaine, you are at risk of suffering an overdose. If you experience any of the symptoms above, you should call 999 immediately.

The operator may try and keep you on the phone until the ambulance arrives. If you’re with someone who has overdosed on cocaine, they may give you instructions on what to do before help arrives. This includes turning them on their side just in case they throw up or have a seizure.

Keeping the core body temperature stable is also crucial during the first few minutes of a cocaine overdose. Using a cold compress to prevent the person from overheating will be of great help to paramedics before they begin treatment. However, hypothermia is also a risk for someone experiencing an overdose, so be sure not to allow their temperature to drop too much.

If the person you’re with has stopped seizing, you shouldn’t take this as a sign that all is well. Seizures could begin again at any point, and medical attention should still be sought, even if it appears as though the initial danger has passed.

Witnessing a cocaine overdose or experiencing it yourself can be terrifying. However, it’s vital you do all you can to remain calm in this situation.

How is a cocaine overdose treated?

Emergency medical care treats the potentially fatal cocaine toxicity that has occurred due to the build-up of dangerous chemicals. This treatment will seek to stabilise basic functions such as:

While different types of medications might be used to treat some of the effects of a cocaine overdose, there is no specific ‘cure’ for cocaine toxicity. Instead, medics will work to prevent serious brain damage or death from occurring as a result of hyperthermia or abnormal cardiac and circulatory functioning.

Once cocaine has been cleared from the system, intensive inpatient treatment is recommended to address any underlying issues that may have contributed to drug addiction. Inpatient treatment is considered the most effective form of addiction treatment because it aims to tackle both physical and psychological aspects of addiction as well as providing a safe and comfortable environment in which to begin the recovery journey.