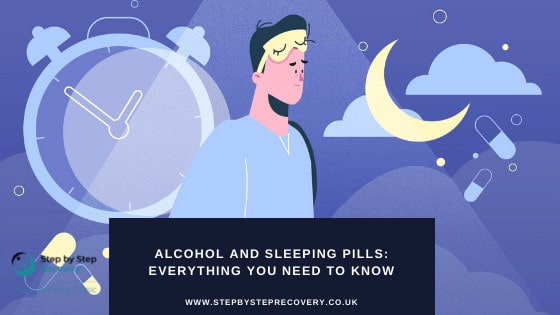 The use of sleeping aids has increased drastically over the last few decades, with more and more people seeking relief for sleep issues such as insomnia and anxiety. Using prescription or over the counter sleep medications can be helpful in the short term, however, the number of people becoming reliant on sleeping pills as a permanent solution for these problems can cause a great deal of pain later.

With both alcohol and sleep medications acting as sedatives, many people believe that mixing the two will enhance the effects of both and promote better sleep. However, this is incorrect, and mixing both substances can result in dangerous and unintended consequences.

Why do people mix sleeping pills with alcohol?

Someone suffering from a sleep disorder may go to great lengths to achieve a good night’s sleep, even if it involves mixing sleeping pills with alcohol. As well as combining these two substances to aid sleep, others do so in order to experience the buzz that comes with taking certain sleep medications outside of their prescribed parameters. This high is often intensified when alcohol is introduced. However, while the two may seem harmless when taken individually, there are many risks involved with mixing them.

The dangers and effects of mixing sleeping pills and alcohol

Sleeping pills are sedating medications that work by suppressing the central nervous system. This in turn can leave you feeling relaxed enough to fall asleep quickly and contributes to longer sleep time.

It’s mistakenly believed that alcohol can also be used as an alternative to sleeping pills, as it similarly reacts with the CNS and causes brain activity to slow down. However, studies have found that alcohol can negatively impact sleep quality and length.

Your liver is responsible for metabolising alcohol, and as the liver enzymes work to process the alcohol during the night, your blood alcohol level decreases meaning you are more likely to experience disruptions to your sleep. While combining sleeping pills with alcohol can contribute to feelings of tiredness and seemingly help you fall asleep quicker, the quality of sleep you experience will be poor. Many people are unaware of the chemical changes that occur in the brain after alcohol use, especially when they’re taken in conjunction with sleeping pills. These changes can interfere with the sleep-related brain waves and cause you to feel unrested once you wake.

In addition to disturbed and disrupted sleep, mixing sedatives such as sleeping pills and alcohol increases the likelihood of experiencing symptoms such as sleepwalking, sleep-eating and sleep-driving. The combination of substances can seriously impair your basic functions, which means you may be completely unaware of these episodes and the danger that comes with them.

Alcohol works in a similar way on the CNS, so mixing the two can be extremely risky, mainly because there is no telling how different medications will react with alcohol once they’re consumed. Sedatives work by depressing your respiratory system which, if not treated quickly, can lead to complete heart failure and even death.

Excessive drinking is often known to result in risky behaviour but combining alcohol with other substances can increase the chances of behaving regretfully, whether this includes sexual promiscuity or violence. You may also say or do something that you regret while under the influence.

Both alcohol and sleeping pills can impair memory and lower inhibitions, which can impact activities such as driving and operating other heavy machinery. It’s important to remember that although mixing these substances won’t always lead to sedation, they can seriously affect your coordination, putting you at greater risk of causing injury to yourself or others.

Can you overdose by mixing alcohol and sleeping pills?

While it’s uncommon for sleeping pills alone to cause an overdose, this is not to say it can’t happen. Altering the dosage of any prescription medication can result in serious harm, and consuming alcohol with sleeping pills would be considered abuse.

Sleeping pills have been used in the past as a means of self-harm and were often taken with alcohol to speed up the process. As drug development has progressed, researchers have made sleep medications safer to use in order to lower the likelihood of experiencing a fatal overdose.

While sleep aids are now considered safer than they once were, there is still a very real possibility of suffering an overdose when these pills are mixed with alcohol and other substances. If you’re using alcohol with sleeping pills to induce sleep, you must familiarise yourself with the possible symptoms of an overdose. These include:

In the most serious cases of overdose, your breathing may become so depressed until it’s no longer safe. When respiratory depression occurs, the lungs fail to exchange carbon dioxide and oxygen efficiently. This dysfunction leads to a build-up of carbon dioxide in the body, which can result in several complications.

Can you mix alcohol and sleeping pills?

The problem with mixing alcohol and sleeping pills is that you never know how certain medications will react with alcohol. The potential for experiencing adverse reactions also increases based on the amount of alcohol you’re consuming and your sleeping pill dosage. While there may not be anything to say you can’t mix alcohol and sleeping pills, it is generally recommended that you avoid doing so, because of the risk of harm that comes with it.

Can mixing sleeping pills and alcohol kill you?

Mixing alcohol and sleeping pills can double the risk of causing harm to yourself and others. Many people mistakenly believe that these substances cancel each other out because they’re both sedatives. However, this is inaccurate, and your chances of experiencing dangerous side effects increase massively. While mixing the two may not immediately cause death, they can both impair judgment and coordination, which can lead to injury and even death.

What happens when you mix alcohol and sleeping pills?

Sedatives like alcohol and sleeping pills work by depressing the central nervous system, which is what causes feelings of drowsiness, eventually causing you to feel sleepy and relaxed. However, taking these medications outside of your prescription can cause serious side effects such as sickness, impaired coordination and depressed respiration which can result in an inability to breathe, leading to coma and possibly even death.