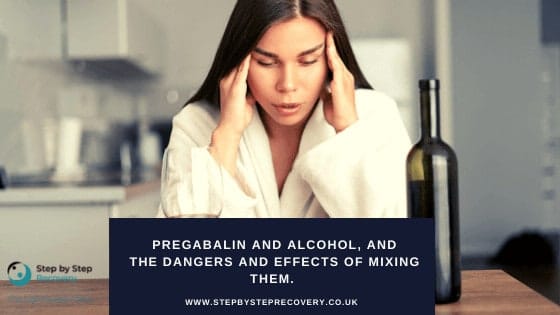 Mixing drugs and alcohol is an extremely common phenomenon. However, when discussing polysubstance use, people rarely consider Pregabalin as a danger when mixed with alcohol.

Pregabalin, also known as Lyrica, is an anticonvulsant medication. It is often used to treat epilepsy, nerve pain, anxiety disorders and seizures, as well as chronic pain like fibromyalgia. Anticonvulsants like Pregabalin work by lowering the number of pain signals that nerve cells send out. While it can be effective in managing pain, it isn’t the same as an opioid, but can be just as habit-forming.

Most of the time, these effects will be mild, and should go away within a few days or a couple of weeks. If any of these side effects persist you should speak to a doctor as soon as possible.

Pregabalin abuse is currently on the rise and isn’t always obtained with a legitimate prescription. Anticonvulsants such as Pregabalin and Gabapentin are becoming more easily available on the streets as well as the dark web. When taken in excess, Pregabalin can produce feelings of euphoria and relaxation, which is why it has become a popular drug to use alongside alcohol and other substances.

Alcohol is classified as a depressant, but not for the reason that many believe. It’s known as a depressant because of the way it affects the central nervous system, not because of its effect on your mood. Alcohol can make you feel more energised when you’ve had one or two drinks. However, it also slows down the nervous system, which can also impact critical functions such as breathing. This makes it harder for the brain to get messages to the rest of the body.

1.2. The dangers and effects of mixing Pregabalin and alcohol

It’s relatively easy to forget that the medication you’re taking could negatively react with other substances. Therefore, drinking alcohol with Pregabalin is not uncommon. However, it’s important to be aware of the possible side effects that could arise as a result of drinking alcohol while taking Pregabalin.

Mixing alcohol with prescription drugs like Pregabalin is usually advised against because of the risk of adverse reactions. However, most people are unaware of what can occur if the two are taken together. Recognising the possible side effects of this combination could be lifesaving.

Pregabalin and alcohol both impact the brain, so taking them together can cause serious problems. One of the main reasons for avoiding this mixture is because alcohol can worsen the symptoms of certain mental health conditions, as well as negatively impacting the nervous system. This can result in feelings of dizziness, drowsiness and impair concentration.

While not common, death is also a possibility when mixing alcohol and Pregabalin. The combination of the two can cause CNS and respiratory depression which can be life-threatening. Using Pregabalin and other medications, including alcohol and muscle relaxers, can increase the sedating effects it has.

Other side effects of mixing alcohol and Pregabalin may include:

It is advised that you avoid using alcohol while taking Pregabalin and abstain from driving or operating any heavy machinery if for any reason you do.

In addition to the physical effects of alcohol and Pregabalin, both substances can also significantly impact your mood, thoughts, and behaviours. Mixing the two can have serious implications such as erratic behaviour and make bad decisions, resulting in injury or death.

1.3 Can you drink alcohol with pregabalin?

There is always a possibility of drugs interacting adversely with one another. However, for some the more vulnerable groups, mixing alcohol with drugs like Pregabalin can pose much bigger risk. This ultimately comes down to the way the body processes alcohol.

As people age, it takes longer for the body to metabolise alcohol, which means it stays in the system longer. Statistically, an older person is more likely to be suffering with other health conditions which require medications. This also increases the risk of alcohol and Pregabalin reacting with other drugs.

Can I drink alcohol if I’m taking pregabalin?

Drinking alcohol while taking Pregabalin is not advised and doing so can significantly enhance the negative effects of both substances. This means that Pregabalin’s side effects can become much worse when mixed with alcohol. Similarly, the effects of alcohol can appear far more severe when taken with Pregabalin. For example, you may become seriously intoxicated after just a few drinks, if you’re taking Pregabalin and alcohol together.

Can you overdose on pregabalin?

Pregabalin is also commonly mixed with other drugs, like opioids, to amplify their effects. However, while an overdose on Pregabalin alone is uncommon, mixing Pregabalin with other drugs increases the risk of experiencing a negative reaction, some of which can be fatal.

Can pregabalin cause anxiety?

Pregabalin, is often used in the treatment of anxiety disorders. However, when used outside of its recommended prescription, Pregabalin can also exacerbate symptoms of anxiety. This in turn can lead to the development of unhealthy coping mechanisms such as drug and alcohol abuse.